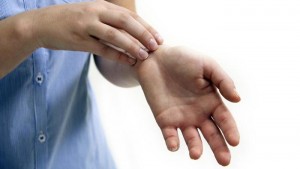 Chronic hives, also known as Urticaria, is an itchy rash on the skin that stays for six weeks or more. It is caused by fluid leak from the blood vessels under the skin’s surface. Approximately one in thousand people develop urticaria in any part of their life but this condition is more common in women than men.
Chronic hives can develop anywhere on the skin and are usually red or white in color. The part of the skin where the chronic rash occurs, feels slightly raised. This bump in the skin is called a weal and these are very itchy. The area around a weal becomes inflamed and red as well.

While it is commonly believed that a chronic hive is caused by the release of fluid from blood vessels just under the skin, it is not the only cause. There can be other unidentified triggers as well. For example, it may be due to an autoimmune problem in which the body’s immune system starts causing skin damage. A chronic hive can also develop due to allergy from certain foods, or medicines. Any part of the skin, if firmly stroked, can also cause a chronic hive or exposure to harsh sunlight can have similar effects.

Other Symptoms of Chronic Hives

While the main symptom of a chronic hive is the appearance of bumps on the skin, which are red in color, it will also be very itchy. In some people with a chronic hive, the throat or tongue may also become affected and as a result, swell up. Swelling on the lips and eyelids also occurs in some people.

To avoid the triggers of chronic hives, you must know if there are certain foods that cause it or some other reason, which you can then start avoiding. However, be aware that alcohol and spicy foods can be the triggers as they cause the blood vessels to widen. Some foods also contain pseudoallergens, which cause the release of histamine in the body that has the same effect as alcohol on blood vessels.
It is impossible to avoid the large variety of foods that contain psuedoallergens so diet changes aren’t a good option when it comes to avoiding triggering factors of chronic hives. To rule out the foods that can cause the condition, you can however, keep a log of your symptoms and the foods that you ate at the time. It is advisable to avoid any foods that you suspect cause changes to your skin.

Some other things you can try to avoid the triggers is to avoid wearing tight clothes, staying cool and avoiding hot weather, and protecting yourself from the sun.
If you would like to rule out the possibility that you have chronic hives or want to discuss your symptoms, contact us at212-319-5282 to book your appointment with a NYC allergist who can help diagnose and treat the condition rightly.