What is Allergic Rhinitis 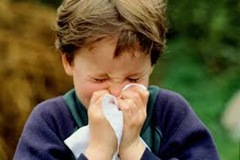 Allergic rhinitis is a common health condition that looks and feels much like a common cold. The condition is the result of contact with an allergen, which causes the person’s immune system to overreact in defense. This leads to well-known symptoms of sneezing, itching, and runny nose. If the person is allergic to a number of grasses used in the production of hay, the condition is called hay fever, although it does not present with a fever. Hay fever is treatable and is not life-threatening, but it can lead to a number of complications. During a visit to an allergist, the doctor will determine what caused the allergic reaction, which can be helpful when treating it.

Allergic rhinitis is caused by a number of allergens – pollen, dust mites, animal material, and mold. Hay fever is caused by grass pollen in most cases. After the allergen is inhaled, the immune system sends signals to a type of cells called mast cells to start producing histamines – chemicals that cause inflammation. The immune system overreacts, and the mast cells end up producing more histamines than needed, and doing other things to the body, all of which lead to the cold-like symptoms.

Signs and Symptoms of Allergic Rhinitis

The most common symptoms of allergic rhinitis include:

Sneezing is usually repetitive when having allergic rhinitis, and is also usually worse in the morning. The nose is runny with clear and watery secretion, although the secretion may change if complications develop. Eyes are watery and itchy, and the nose, throat and ears will also possibly be itchy. Less common symptoms include swelling of the eyelids, nasal obstruction, headaches, coughing, and dark circles under the eyes.

Since there’s no cure for allergic rhinitis, treatment is usually aimed at the symptoms, and includes:

If you want to discuss your treatment options for hay fever, contact us today to schedule an appointment with the best Allergy Doctor in NYC.