Atopic dermatitis, also known as eczema, is a common condition in babies and small children, but most of them outgrow it as they become older. Eczema results in itching on the skin that starts with dryness and leads to a rash that can become severe. Children facing the condition may feel irritated or different, particularly if they have diet restrictions that prevent it from occurring. 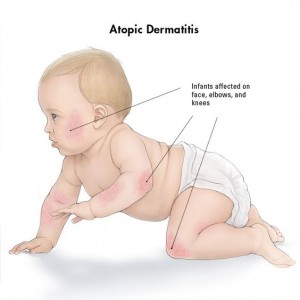 The exact cause of atopic dermatitis is not known and there could be a wide range of reasons that trigger it. In some children, it is because of a family history of allergies while some of the other causes could include:

Itching is the main symptom of atopic dermatitis, which can be severe, and recurring, leading to a rash. A rash is like a red patch on the skin and it may be dry, itchy, or scaly. It may also become rough and thick from continuous scratching or develop into a fluid filled sore.
The most common areas affected by eczema in children are the neck, legs, arms, scalp, and face. In babies from 2 months to 2 years, the rash may ooze fluid and occur in winters when the weather is dry, leading to red patches on the skin. For children who are older than 2 years, the rash may be dry and cause the skin to thicken.

How to Prevent Atopic Dermatitis 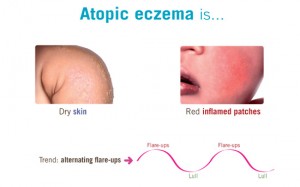 To prevent atopic dermatitis in children, you must be very careful about the products used on their skin and not use any product that is not meant for children’s use. Always use mild and soft shampoos, soaps, and creams that contain moisture. If your baby is younger than 6 months, breastfeeding will help build their immunity and protect against allergies if it runs in the family. Keep an eye on your child’s diet as well to see if any of the foods you feed them are causing rashes.
Excessive washing is also harmful to the skin as it peels off the top layer. Make sure you are not bathing your child too much and not leaving them in the tub for too long. A bath of 10-15 minutes is sufficient. Always make sure you dry your child’s skin carefully after a bath especially in areas where the skin folds such as under the arms, back of the knees, etc, as these areas are more prone to eczema. Keep your child’s skin moisturized with a product made for children.
If you see your child suffering from atopic dermatitis, make sure you consult an allergist to prevent it from spreading. Contact us at 212-319-5282 to set up an appointment with one of the best NYC allergists today.

All over the world, around 30% of the people suffer from hay fever. In the US, almost 10% of teenagers and 7.8% of adults also complain of hay fever. Although it is most common in childhood, hay fever can occur at any stage of life, so it’s important to understand its causes and symptoms to find relief from it.

What Is Hay Fever? 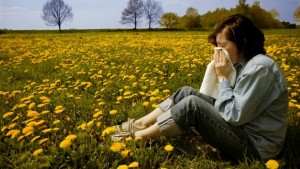 Depending on the type of hay fever you suffer from, the symptoms can vary in severity. They also depend on the weather conditions and pollen count. However, some common symptoms of the condition include:
Runny or blocked nose
Frequent sneezing
Watery or itchy eyes
Itchy ears, throat, nose or mouth

There are other less common symptoms of hay fever as well which you should know about and these include facial pain caused by blocked sinus, headache, tiredness, feeling fatigued, experiencing ear ache, and loss of smell. 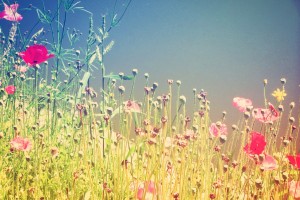 If you have seasonal hay fever in the spring, it may be due to tree pollen. In the summer, you may be allergic to grass and weed pollens. In other seasons, weed and fungus spores may be the cause of your allergic symptoms. However, if you suffer from perennial hay fever, it may be due to indoor allergens such as animal dander, dust mites, feather or mold that accumulates in damp areas in the bathroom or basement.

How to Find Relief

The surest way to find relief from hay fever is to know your allergic triggers and to avoid them. If your hay fever is triggered from pollen, avoid going out unnecessarily and wear a mask. If it’s from dust or pollution, again, consider avoiding such places when possible and wear a mask when stepping out.
There are also some over the counter medicines available to control hay fever but you must consult an allergist to use the right one for the kind of condition you suffer from. Be aware that some over the counter drugs may be sedatives that cause drowsiness. Seasonal hay fever can also be treated with the use of antihistamine nasal sprays and people five years and older can use them with ease.
If you suffer from perennial hay fever, you must keep the indoors of your house as clean as possible, making them dust and mold free to avoid suffering from a possible allergic attack. However, for the best treatment options, you must visit your NYC allergist who can treat your condition and help you cope with it. Call us today to schedule your appointment.