Conjunctivitis is an inflammation of the thin tissue that covers the inner sides of the eyelids and the white part of the eye. This thin tissue, called the conjunctiva, can become inflamed for a number of reasons, one of which is an allergic reaction.

Allergic conjunctivitis is not life threatening. It is more unpleasant than painful and is easily treated, but it should prompt a visit to an allergy doctor for a recommendation on the best course of treatment.

When a person who has an allergy comes in contact with certain substances they trigger an overreaction of the immune system. That reaction is called an allergic reaction and the substances are called allergens. Many different allergens can cause allergic conjunctivitis, including:

After coming in contact with an allergen, the body will start an allergic reaction specific to that allergen. In the case of allergic conjunctivitis, the reaction in the eye is caused by types of cells called mast cells, which release histamines that cause the inflammation, and make the eye tear and itch.

Signs and Symptoms of allergic conjunctivitis

Allergic conjunctivitis is characterized by the following symptoms:

These symptoms will most often appear in both eyes if the conjunctivitis is due to an allergic reaction. One eye may be affected more than the other. Conjunctivitis is also commonly called pinkeye because of the color of the white part of the eye may turn red. This is due to widening of the blood vessels in the eye.

The most common symptom is itching, and others include redness, swelling and tearing. Some pain may be present, as can be sensitivity to light and feeling of a foreign object in the eye.

The symptoms are common for most types of conductivities, so it’s important to visit an allergist to determine what exactly caused the inflammation. Treatments vary depending on the cause. If you’re prone to allergic conjunctivitis, you should visit an allergist, who may recommend one of the following treatments:

When dealing with allergic conjunctivitis, the most important thing to do is to remove the allergen. A cold compress is the best first aid treatment, as it soothes and removes some swelling. An allergist may prescribe antihistamine eye-drops, mast cell stabilizing medications and non-steroidal anti-inflammatory drugs in mild to moderate cases. In severe cases, oral anti-histamines or steroids may be introduced as treatment options.

If you’re experiencing any of the symptoms of allergic conjunctivitis, contact us today and schedule an appointment with the best Allergy Doctor in NYC. 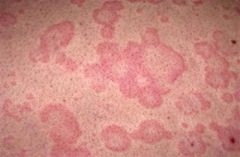 Hives are a rash that emerges as red, raised itchy bumps on the skin. The most commonly known cause of hives is an allergic reaction. They can also appear for unknown reasons. Hives are usually harmless, but they can sometimes be followed by another skin reaction called angioedema – swelling of deeper layers of skin. Angioedema can be possibly be life-threatening if it affects the tongue or throat and block the airways.

Hives can be caused by a number of different triggers. The most common causes of hives are allergens, such as:

Other common causes are environmental conditions, such as exposure to cold, heat, wind, sunlight, stress and even exercise. Dermatographia, which literally means “skin writing,” can also cause hives, and scratching the skin will produce skin redness in the form of the scratch. Chronic hives usually develop for an unknown cause, but they may also develop as an autoimmune response.

Hives appear with the following symptoms:

The common symptoms include wheals and itching. Wheals may go down and new ones may develop before the rash subsides, which makes it look like the condition is moving. Hives usually affect larger areas of the skin. A small percentage of people with acute hives, and about a half of people with chronic hives, will also have angioedema. Angioedema is a painful swelling of the inner layers of the skin. This can cause serious life-threatening health issues and obstruct breathing and swallowing. 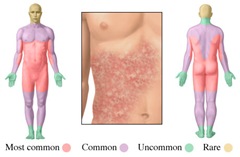 Treatment options for hives include:

For acute hives caused by allergies, it’s important to determine the allergen and avoid it.

Antihistamines, both over-the-counter and prescribed by an allergy doctor, are the most effective treatment for mild to moderate cases of hives. More severe cases of hives are usually treated with oral corticosteroids, which reduce swelling and itching.

Cases of severe angioedema, especially if the swelling blocks the airways, have to be treated immediately with a shot of epinephrine to prevent worsening of the symptoms and death.

If you have suffer from hives, contact us today to schedule an appointment with the best Allergy Doctor in NYC.